The new course undertaken by Harley-Davidson® highlights the company courage and determination to follow an ambitious project: 100 new motorcycles by 2027 between existing models upgrades and brand new models. This FXDR 114 sends a strong signal: it represents a first step towards a future labeled Live Wire, a project that firmly places the company in a category that Harley-Davidson® wants to dominate: the electric.

It is clear that nowadays Harley-Davidson® is aiming to lower the target age of its users, the new Fat Bob® has proved to be a winning project and this FXDR – despite the purists criticism – does not seem to be less appealing. We have not yet had the chance to try the FXDR® so today we will give you a detailed overview of its specs.

Harley-Davidson® FXDR 114®: project light weight! An aluminum swingarm allows a weight reduction of 4.62 kg (6.25 kg compared to 10.88, 43% less) over the Softail conventional steel swingarm. The aluminum rear wheel, which is also lighter than conventional rear wheels, is 18 ” with 240 mm tires. 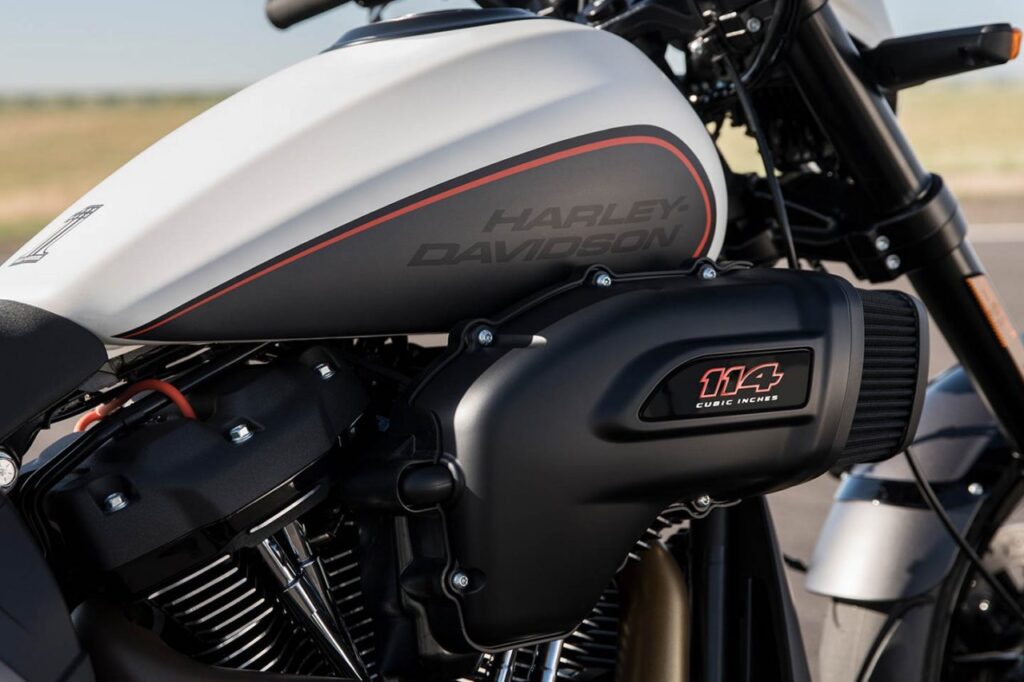 The 19″ forged aluminum front wheel has a very thin spoked design. The saddle and the tail section are supported by a counter-frame made of welded aluminum tubes. This structure replaces the steel subframe, the steel fender and the aluminum mudguard supports used on other Softail models, for a weight reduction of 3.17 kg. Both the mudguards and the tail section are made of composite material for an additional weight loss.

The new FXDR 114® is equipped with the most powerful engine offered for Softail models, the 114-cubic-inch Milwaukee-Eight V-Twin capable of delivering the maximum torque of 16.4 kgm at just 3,500 rpm. This model suspensions – we finally see an upside-down fork – are supposed to be great on curvy roads and now the motorcycle has more ground clearance than other Softail models. The braking system is up to the new package offered by Harley-Davidson®, the double 300mm front disc and the 292mm rear one guarantee an optimal braking also thanks to the nowadays mandatory ABS.

As previously anticipated, this model aims straight to the future. Firm and muscular lines, 16-liter stretched tank and a short tail that shows the 240mm wide wheel says it all about this motorcycle soul. A digital panel and full LED head and tail light are the icing on this directly delivered from the future cake.