Skip to content
Home » The Battle of the Kings: a Harley-Davidson contest
Previous Next

The Battle of the Kings: a Harley-Davidson contest

Battle of the Kings is a custom motorcycle contest created by Harley Davidson. Every year, the most creative H-D dealership custom teams compete against each other to be crowned the best customizers of the year. Pretty cool uh? Let’s see how this year competition worked this year and who won in Europe.

Battle of the Kings rules

In Italy the contest this year requested its participants to use a Roadster model as a starter and, with a 6000 euros of budget to spend for purchasing parts directly from the 10.000 articles long Harley Davidson Genuine Parts & Accessories catalog. The challenge here is that those parts need to be at least 50% of the whole project value. Requirements are not the same fo all the 21 countries that participate to the contest: although budget, catalogue and motorcycle value are the very same, the base model may vary for some countries: dealers from other countries, in fact, could choose Sportster Dark Custom, Sportster Forty Eight 1200 or Sportster Iron 883 (this last model was the protagonist of last year Italian Battle of the Kings).

Last February in Milan they won the Italian contest and therefore qualified for the European Finals. When it came to go back in Milan for the finals, which took place at the EICMA, the Harley Davidson Perugia custom team had a lot of expectations. They were not wrong at all and, right now, they must be really proud of what they have achieved: the European contest had 191 participants and 9 finalists, to come in first place against such competition is pretty rewarding.

BombTrack, this is the name of Harley Davidson Perugia Team winning project, motoblog talked about it on an article. The inspiration for the project came from the racers of the 70’s, when motorcycles were stripped down to the essential to save weight. The perugian team,  led by their captain Bruno Ranucci, did exactly that.

Alessandro Mannucci, the person who takes care of all accessories and parts, organized and handled all parts while Alessandro Testini and Lorenzo put the motorcycle together. BombTrack is a perfect mix of Harley Davidson Genuine Parts and custom parts made from scratch.

Attention to detail is simply incredible on this motorcycle, the 6,9 litre Peanut tank and the fender are cut down to the bare minimum; accessories that together play a key role in the motorcycle minimal look. The front mud guard and the fairing are custom made. Actually, the fairing comes from a V-Rod and integrates an awesome LED headlight secured to the motorcycle by a custom made bracket attached to the original cockpit. 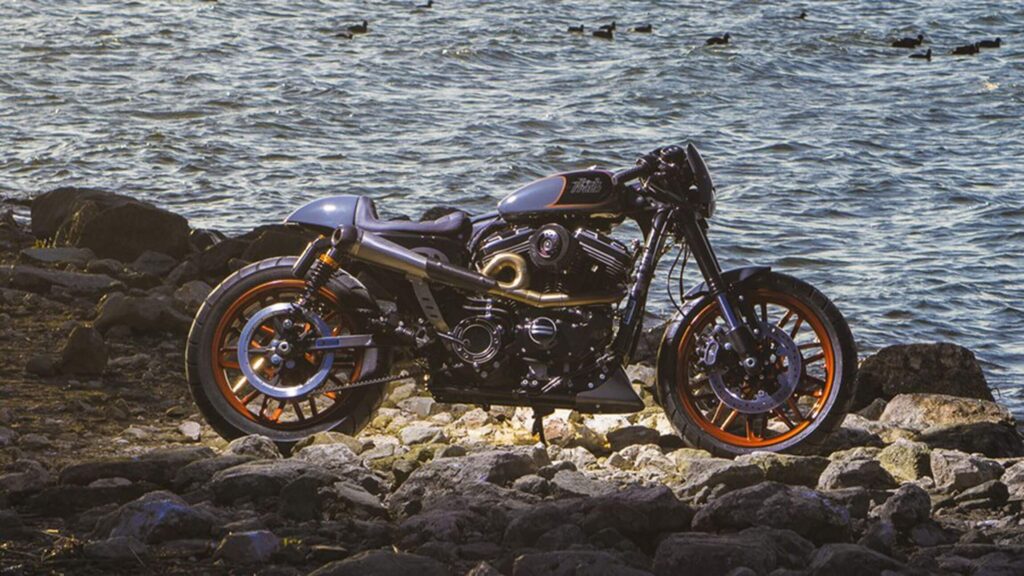 This motorcycle sporty soul are enhanced by the complete motor carter kit from the Rail Collection, a complete set of Scremin’ Eagle suspensions with the Piggyback reservoir, all picked from the Harley Davidson Genuine catalog. Performance were improved using a Roland Sands Design air filter and a tailored exhaust made by Arrow for the occasion. Arrow took a titanium Pro Race exhaust, created ad-hoc manifolds, and refined it with Mohican carbon fiber details (line created by the company for Harley Davidson). To top it all off, Harley Davidson Perugia team decided to tune it using a Screamin’ Eagle Super Pro Tuner which makes the filter and exhaust work perfectly together giving a bit more torque and horsepower to the 1200 small block.

Handling is left to a kit of sport bikes handle bars, adjustable brake and clutch levers and adjustable pegs by RSD. The minimal look of the BombTrack is enriched by front turn signals hidden under the control panels and by a LED backlight that also includes blinkers.

The paint job, relized by Cb Design, enhances this motorcycle tank lines thanks to a retro style graphic over a Telesto grey frame. The wheels are original with a Orange Candy paint job. The Battle of the Kings not only shows everyone the beauty of Dark Custom and all other Harley Davidson Genuine parts but, also, shows everyone that with a fair amount of money is possible to create the custom motorcycle of your dream.