Customizers seem to love Indian Motorcycle models. Since we have just entered the second half of 2022, we thought it might be good to see how the custom world is doing.

Customizers seem to have a thing for the all new 2022 Chief. To be fair, it is mostly due to Indian Motorcycle capacity of involving great names into its projects, and their projects during the last year mostly revolver around this motorcycle. Something happened with FTR models too, but nothing huge. We will probably cover it in another article.

Let’s give a look at some of the best customizations of the last year.

Back in April 2021, America’s first motorcycle company announces the Indian Chief Custom Program. You might be wondering why, out of all Indian Motorcycle models, the company chose the all new 2022 Chief. The answer is very simple: to showcase the vast number of customizations possible on the 2022 Chief platform. They decided to “go big or go home” and asked Paul Cox & Keino Sasaki, Carey Hart, and Go Takamine, to produce totally unique interpretations of the iconic motorcycle.

The duo’s work on the all-new Chief represents a significant personal milestone: it is the first time that they have worked on a build together since their tribute bike built for Indian Larry his untimely passing. The work they have done is simply incredible: 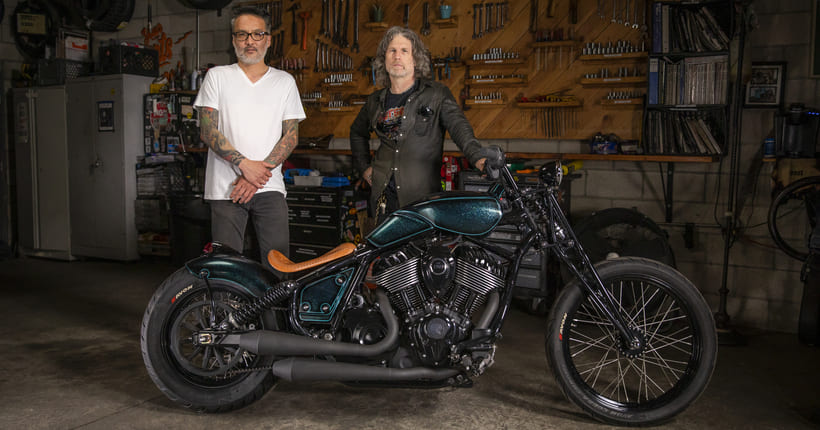 Go Takamine take on the 2022 Chief shows all his passion for vintage Indian Motorcycle models. The best part about this, is the fact that it looks like a rather easy customization but, in reality, it is not: take the tank for example, he narrowed the width and height of the original tank to the limit where the fuel injection pump can be attached. He also cut the height, adjusted it, and attached two vintage Indian Motorcycle tank caps. As a result, the tank looks like it is stock. This is typical Go Takamine, a lot of attention to detail and pure perfection. Here is the result: 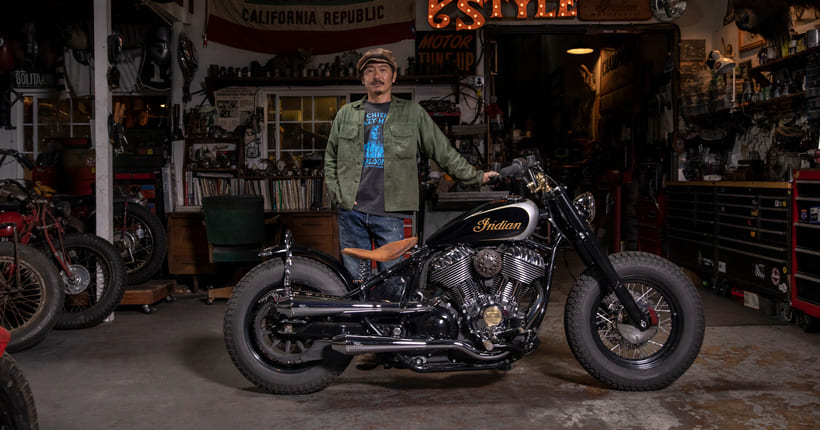 Last but not least, Carey Hart Take on the 2022 Chief. As a former freestyle motocross competitor and motorcycle racer, Carey’s build is inspired from his MX world. The bike was built around the future owner (who, by the way, is Jon Bernthal), the main idea is to make sure that the owner fit in the motorcycle like a glove. The amount of parts is astonishing:

Since the 2022 Chief custom program was highly successful, in December 2021 Indian decided to organize something special for the Wheels & Waves. The company decided to be present with the complete line of Indian Motorcycle models, plus one custom Chief to be gifted to a lucky voter. People had to vote the best rendering produced by 4 customizers: BAAK, Lucky Cat Garage, Mystic Mechanic, and Tank Machine. Among the 4 customized Indian Motorcycle models, the most voted was the one designed by Tank Machine. Completed in just three months, ‘GRIND Machine’ made its public debut at the opening of the Artride exhibition during Wheels and Waves on Thursday June 30 and was awarded to prize draw winner, Fabien Orquin, on the festival’s main stage on Saturday July 2.

Clément Molina founded Tank Machine in 2015 with a focus on motorcycle design, customisation and the development of Plug & Play Kits. Already well known for his many outstanding customisations of Indian Motorcycle models, his submission for the Indian Chief Design beat strong competition to become the winning concept that would be turned into reality. I mean, look at it, it is simply breathtaking: 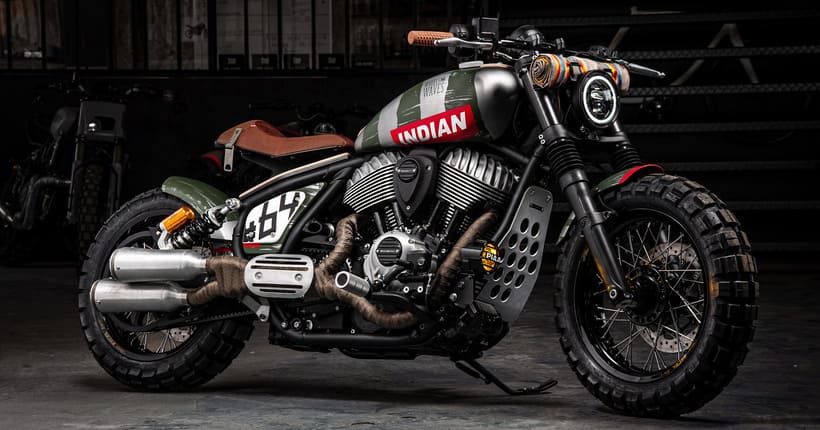 To customize does not only mean to extremely change the looks and the usability of a motorcycle. To customize also means to make your motorcycle reflect your style. It is a process that can start gradually and can end wherever the owner is fully satisfied with how the motorcycle looks. If you are in for some leather saddlebags, seats and accessories, here is a wide line of saddlebags, seats and accessories for Indian Motorcycle models.